“We are, each of us, angels with only one wing, and we can only fly embracing each other.”  – Luciano Decrescenzo

Like me Luciano must have believed it is too hard to achieve greatness alone. The focus on the individual  genius in business, the push for a ‘personal brand’ takes us further from the reason humans have become the dominant species on the plant: our strength is in our ability to co-operate. 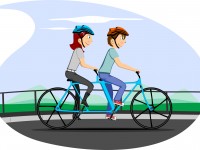 Co-operation is our greatest strength. Whether that be physical co-operation (circling the wagons) for our safety or intellectual co-operation, sharing medical research, we get better outcomes when we work together. When we are isolated we do less work which means we achieve little, as we preserve our energy to survive till help arrives.

Humans have very complex social structures underlying our survival and quest for greatness. Co-operation not competition brings out our best. The smallest workable unit is the couple, then a family of three, to villages and then tribes. Where do you belong?

Luciano Decrescenzo, the Italian writer, filmmaker, and intellectual, has published 28 books on subjects ranging from Greek philosophy to his own childhood in Naples. He was born in 1928 and worked as an engineer for IBM for several years before turning to philosophy and writing. He has also directed, written, and starred in a number of Italian language films and received honorary Athenian citizenship in 1994.