Learning to effectively say ‘no’ without flinching or thinking it was damaging my relationships is a lesson that took me many years to get. Maybe I’m a slow learner? Maybe it’s my female instinct to value relationships above myself.  It used to strike me as too confrontational to simple say ‘no’. But not learning to efficiently communicate ‘no’ can be a huge time drain in our busy lives and creates uncertainty and resentment in relationships.

I finally learnt this lesson at home from my children but it has proven to be an important tool in all my relationships, with adults both personally and at work.When I first became a parent I was a very collaborative and soft individual. When my son did things I didn’t like and I wanted him to stop doing it I used statements like;

When I only had the one child this style worked. While it was exhausting and frustrating, I could still continue to do things that way. After my second child learned to crawl it became obvious that my systems were no longer working. Having two little boys in the house the available time to negotiate and persuade became zero.

I learned that a clear and firm direction was not only better on my nerves but better for the troops as well. Now, when I say NO, in a clear and serious voice, everyone knows exactly what that means, even the baby (child three, a daughter). 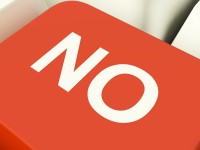 Continuously threatening is just as ineffective and exhausting as being too soft. As a parent, or as a leader, you cannot present every requirement as a closed statement; you will do this, or … You cannot run any team, including a family, in a permanently adversarial state. If you follow through with every threat you become the enemy. But then if you don’t follow through with every threat you get ignored and become ineffective, so stop threatening.

I have learnt that none of these things means no:

As a parent my job is to lead and at times that requires making some really tough decisions, and holding my ground. My job as a parent is also to teach. I teach my children how to weigh up issues and make decisions. I will share my thinking processes to give them examples of decision-making. I will take them through situations and ask them to make the decision to let them practice under supervision.

But when it’s my place to make a decision, the quicker and more precisely I relay my decision the better. If the decision is no then saying NO is the quickest and most effective way to say no. All those other ways I used to say it just prolong the tension for everyone.