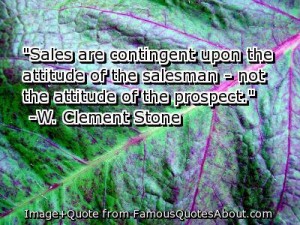 Stone is one of America’s rags to riches super stars. From selling newspapers at 6 years old to owning the news stand at 13. Together with his mother they started what was to become America’s largest insurance company, Combined, when he was 16. Within ten years they had over a thousand agents selling insurance across the United States.

He credits his success to Napoleon Hills book Think and Grow Rich.