We get it when salespeople freeze up in fear when they start out. But what about when prospects refuse to listen no matter how convincing you are because they are in fear?

How does this work and how do you help them overcome this and close the sale?

To understand how to achieve anything , we need to look at the psychology of fear – the why’s, what’s and how’s of customer fear and overcoming it.

Let’s have a look at this diagram of a person’s head. Let’s pretend it’s transparent so we can see what’s going on inside.

Now at the very top of your spinal cord is the first part of the brain. That’s the part of the brain that all animals have in common. Among its medical terms, It’s also called the primal brain.

All animals have that sort of brain at the top of their spinal cord, and what that is designed to do is take in information from the senses. Your eyes, your nose, your mouth, from your body in terms of touch and your ears. 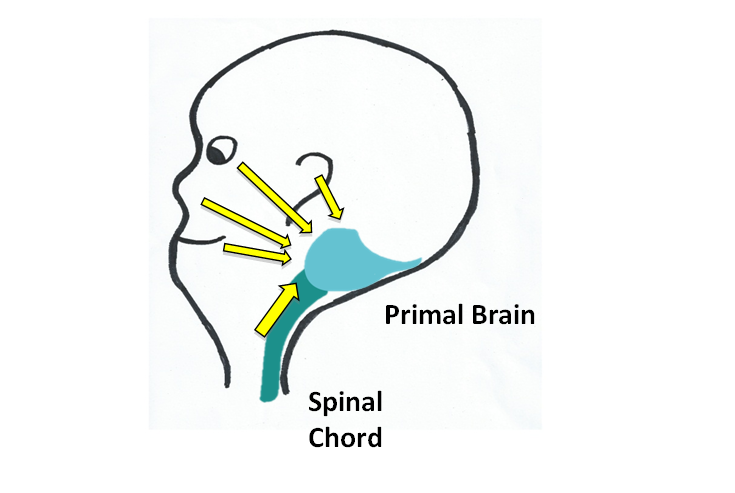 Now what does this primal brain do with all that information it receives from the senses? Essentially, it is responsible for keeping you alive. It manages all of your bodily functions, eating, digestion, removal, and all those good things.

Why it is important to you to understand this process is that predominantly, it is also a fear filter. When something is coming in from the senses, it is the first and dominant decision processing facility. We’re talking about how people decide to buy the Ferrari, the house, or the new pair of shoes. It’s exactly the same process. So this is the bit that can make selling a huge pain for you.

So you have to be careful and aware that when people walk into your shop, car dealership, or you enter their home as a real estate agent, you could be sending people into instantaneous freeze, fight or flee response.

So how does it affect my ability to sell if the brain is in fear respond mode?

As mentioned, when in fear response mode, the larger part of the brain, the modern one, will shut down, meaning it will not be able to process information for logic. So…logical thinking? Gone. Rational thinking? Gone. Decisions making is still working as that is in the primal brain, but after the fear response is activated the only decisions the primal brain is willing  to make are about survival.

So until the fear reaction is resolved, no other useful processing will occur.

So really, if you have triggered the fear filter, nothing you say after that, nothing coming in from those ears is being pushed through to the logic part of your client’s brain. They are not thinking about return on investment or how glamorous they will look in that new Ferrari or how fashionable the new shoes are, or any other positive thing that your product gives them.

They won’t be thinking about any of it.

They will be feeling and acting on fear.

So how do you get past this tricky fear filter and start selling?

Read on about the role of trust in overcoming the fear filter for the second part of the article.

3 thoughts on “The Role of Fear in Selling”